Last week’s day of action was amazing! This week, we’re going to turn up the heat on the CBC because they can, and should host this climate debate. And, that’s our key message this week – Canada needs a federal leaders’ climate debate and the CBC can make it happen.

There are 3 things you can do to take action this week:

Cam from 350.org also wrote up a helpful blog laying out 10 questions the CBC could ask at a federal leaders’ climate debate. You can see that here.

Highlights from across the country:

Our big highlight was last Wednesday when thousands of people in over 30 communities took action! Here’s a rundown of the entire day. 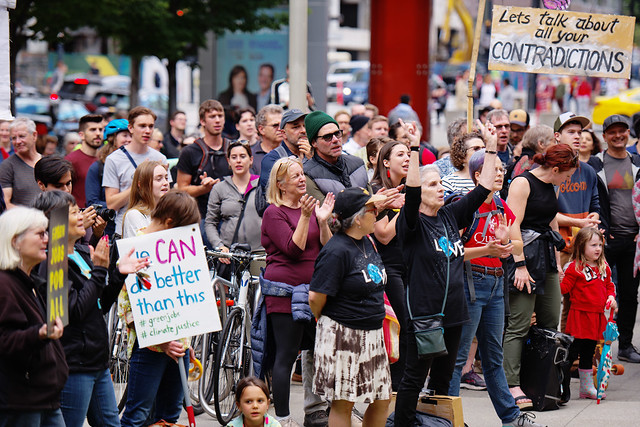 But that’s not all that happened! Earlier this week, Our Time Toronto learned that Ontario Today, a daily CBC radio call-in show would be talking about climate change. They quickly got organized and flooded the show with calls, getting many callers on the airwaves calling for a climate debate – including some people who had no connection to Our Time! You can read more about how they made it happen and how you can do the same thing in your community by clicking here.

Polls continue to project that the federal election is a dead statistical heat among the frontrunners, with pundits focusing on the potential of a minority Parliament. At this point, all bets are off – and remember, polling is only a snapshot in time, so take this with a grain of salt. It’s on us to create momentum behind champions of a Green New Deal.

Join the Our Time Bootcamp this upcoming Monday. It’s an online training for anyone who wants to organize with Our Time to learn about our campaign DNA and our strategy to win.  Click here to register for the training.

Register for the training

That’s it for now. Thanks for reading this edition of Our Time News – we’ll be back in two weeks with more.